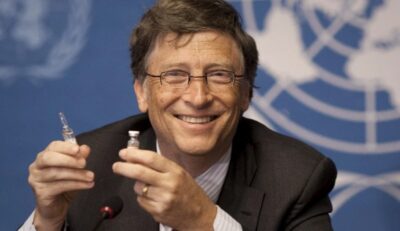 Many times I have asked myself why I persist in writing about economics, why I dedicate my time to research, analysis, and elaboration.

The fact is that, since I rely on reliable data, obtained from official sources, I delude myself that I can provide people with a real vision of how things are, convinced that the first step for any change is awareness. It is useless to go on a diet if you do not accept that you are overweight.

In short, I deluded myself that others thought like me or that this society needs a change and that the awareness of how things actually are  even in the economy could be a push for change.

The fact is that none of this matters. It doesn’t matter because, by now, everyone knows everything. My podiatrist is not a podiatrist, but an expert virologist that those of  television give him up.

He was scrambling my big toe when I got the bad idea of ​​telling him that I had done a short of Astrazeneca. Blocked in disgust, he invited me to put a coin on the inoculation point which would have remained attached like a magnet because the vaccine contains ferrous metals which then (he added) are not even ferrous metals, but sensors that allow Bill Gates to keep me constantly under control.

My butcher slices ham while giving constitutional law conferences. Last year he went to the Carabinieri (the Italian Military Police) to file a complaint against the Prime Minister because his Decrees are unconstitutional. My invitation to reflect that Giuseppe could afford far tougher lawyers than his and that – indeed – Giuseppe himself is a lawyer was useless. Who knows how it ended.

The earth is flat. In fact it is not quite round because it is an oblate spheroid. But, then, how did Ferdinand Magellan’s expedition leave Seville on August 10, 1519 and return on September 6, 1522? Obviously with the “Pac-Man effect”[1].

Airplanes in flight spray chemicals to dull us.

And when you ask why all this (I have long since given up), the answer is that Bill Gates, Baron Rothschild and George Soros are plotting to enslave us all. I laugh at the thought of those three who have a group on Whatsapp where they exchange the plans of the New World Order.

Just think how much Baron Rothschild cares about myself.

Just think how much these hallucinates can give a damn about my economics writings.

A few days before my first dose of Covid vaccine, the vaccination certificate appeared on my electronic health record. Between Diphtheria, Tetanus, Pertussis, Polio and Smallpox, including the boosters, I received 27 doses of vaccine plus the military service sting whose unknown content kept me safe from any ailment for at least two years.

All 27 vaccines were mandatory and my parents did not allow themselves to question their effectiveness for the simple reason that, during and after the war, instead of with others “enlightened by social networks”, they had confronted with typhus and paratyphus and, of course, they greeted with joy the discoveries of medicine that allowed their children not to suffer similar tragedies.

My parents were aware of what they knew and understood and what they did not know and did not understand. They were aware that they did not have the cognitive tools to understand certain things, but they did not allow themselves to question those who knew more than them. They had no self-esteem problems despite all the troubles of the war because they compensated for their limitations by honoring their values. In short, they stood in their place.

Why has society been convoluted to this point? Because, today, people, instead of admitting that they do not have the tools to understand everything and trust those who have them, take the short road of accepting bizarre theses, without a shred of proof, because they are easy to understand. It is called “cognitive dissonance”. The proof that those theses are correct, for them, lies in the fact that, on social evil, they meet other hallucinates who support the same  theses with all due respect to their self-esteem. Note that I am not bringing up the late Umberto Eco[2].

Which came first, the chicken or the egg? I wonder if people no longer trust institutions and what they communicate or if we are in the presence of a general cultural and intellectual decline whereby anyone, even without tools, can question official information, preferring to rely on sources. whose lack of authority is obvious.

However, I have encountered worse because, you know, there is no end to the worst.

Days ago, with an established professional (not a podiatrist or a butcher with all respect for podiatrists and butchers who continue to focus on feet and hams rather than on the highest systems) the question was commented on, today very uselessly raised by our politicians , the problem of unemployed young people and / or at home with their parents until adulthood. In particular, it was discussed that today’s young people are unable to get loans from banks to buy a house and start a family.

I expounded my opinion that the banks will never facilitate young people because they base their decisions on the results of the risk centers, on permanent employment contracts to which, by now, no young person can reasonably aspire, and so on. Furthermore, even if the State would do what Prime Minister Draghi would like (guaranteed advance) or Secretary Letta (inheritance tax to finance a fund for young people), the banks would still not disburse mortgages because, as they have shown at the beginning of the pandemic, they do not trust the guarantee of the state.

So I painted an alternative scenario that is not my own work, but experience made in other countries (USA, UK and Switzerland to be precise).

Why buy the whole house? Why not just buy the walls and leave ownership of the land to a third party? In America it’s called “landlease”, in Switzerland I don’t know, but they do it there too. In practice, the owner of the walls (who occupies the house) pays a rent to the owner of the land equal to a few percentage points more than the cost of the latter’s money. Given that the percentage cost of land in Italy is substantial, the price of the house would become more  affordable.

And if you want to spend even less, why not just buy the right to home? In England it is called “leasehold”. The right of residence has a (long) duration and in the end, the whole house can be renewed or redeemed. I have simplified a lot and we need financial players behind them who are not there in Italy because the financial market is the prerogative of the banks. In any case, this scheme would allow the real estate market to “spin” with the consequence of an appreciation of the values ​​of land and houses and, therefore, everyone would win: the owners of the land and houses because they would see their assets revalue and the young people who they would have a better chance of making a home, a family and becoming adults once and for all.

In fact, I expected the main criticism of my proposal to be the problem of the timing of justice. What happens, for example, if you don’t pay the rent for the land? In America they take your house away without fuss and quickly. Here, it cannot be done (I think it would be a “commissioner pact”) and therefore we would have to wait and ruin our liver.

But the criticism was another, that is “something like this, here, is done with public housing and if you do an operation of this type, then they tell you that you are a tramp who cannot afford a house“. Very well because, in this way, in order not to be given tramp, our young people will actually be tramp. Is flawless.

And it is certainly not worth commenting on the deleterious effect of the beneficial reign of Democritus under which we live which allows a Senator of the Italian Republic to breathe his mouth and associate the tragedy of the Mottarone cable car and its 15 victims (15 because the 5-year-old boy who survived without his parents anymore and his little brother is the most victim of all) to the lack of state aids. Dear Senator, with your boutade you have confirmed that “one is not worth one”.

Finally, how can we fail to mention the various circles founded on a hypocritical application of a religious faith. I am not talking about psychosets and the like, but – for example – of that movement whose acronym is formed by two consonants where if you do not adapt to the manipulated thought and, in the face of Freud, Jung and associates, if you do not remove any thought that adepts define pro domo as”transgressive”, you do not make a career in the bank and more. There, awareness is there, but it is  sick because the members of those circles are aware that they are telling each other the tale of the magician to obtain the social and economic advantages from which we thinking beings are excluded. Which is even worse even if it surprises me less because convenience associations have always existed.

But how does a problematic society like ours get out of crises, create wealth, grow when it is populated by flat-earthers, lovers of the conspiracies of the Gates-Rothschild-Soros triad, people for whom Goldman Sachs is a factory of demons rather than of money, people who hold back any innovation for fear of the judgments of others and manipulators of thought?

It is really a difficult problem because the right of access for everyone, including hallucinated, to the public space of democracy is not established by social networks, but by the Constitution. Since democracy and the Constitution are achievements and, of course, the solution is not their abandonment, the question is what to do in the face of the existence of hallucinated, social cowards, of all those who reject the awareness and use of lateral thought. In short, of those who know everything.

I had hoped that the pandemic would realign people with my parents who stood in their place and trusted those who knew more than them, but the situation has worsened. Everyone knows everything.

But to return to the question of “what to do”, I say that the answer is not to homologate and to insist. For my part, after today’s outburst (for which I thank) I promise that, from now on, I will insist on research, analysis, processing and my writings. In the meantime, I invite my friends, the podiatrist and the butcher, to concentrate on doing their job well and leave the health and legal issues to virologists and constitutionalists.

Anyway, I wrote something about economics this time too (the solution for the real estate market).

[1] According to Darren Nesbit (not the actor), once they reach the edges of the earth, the planes, as if they were huge Pac-Man, disappear and then reappear on the opposite side. The scientist, to justify his theory, even recalled Albert Einstein’s general relativity, arguing that the Pac-Man effect would be due to the fact that “space-time folds in on itself” (from the proceedings of the “Flat Earth Convention” of 2018).

[2] “The Web didn’t invent idiots, it just gave them the same audience that Nobel Prize winners have.” Statement made in Turin on 10 June 2015 while chatting with journalists after receiving yet another honorary degree.